SmallBusinessPrinting has taken the initiative to begin using soy-oil based inks instead of traditional petroleum-based inks. In a time when people are recognizing how delicate the environment is, it is important for companies to shift into a more environmentally conscious state. 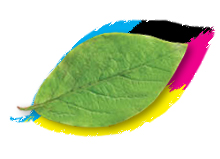 Soy inks are a great advancement in the print industry. Soy inks contain non-toxic soybean oil, the same oil which is used in cooking oils. Soy based inks are safe and environmentally friendly because of its simple compound compared to petroleum–based inks.  Using a simple process to make the ink, it consumes very little energy and makes it very efficient. Soy inks are naturally low in VOCs (volatile organic compounds, chemical compounds that evaporate and react to sunlight) and its usage can reduce emissions causing air

Soy inks distinguishable clearness allows for much brighter colored ink, which petroleum-based inks do not allow because of its darker content. Thus soy inks are popular for their vibrant colors. Soy inks can also be easily removed from paper, which is helpful in paper recycling, as it is quicker to process the paper. As the print industry evolves, soy inks are becoming an increasingly popular alternative to traditional petroleum–based inks.